= A World of Miracles: 12 Reflections on Childhood and Memory – Nigel Morgan
Skip to content

for Violin and Piano

from A World of Miracles

There is a small but fascinating repertoire of music that is made up of pieces whose subject is childhood. Most of these pieces are miniatures and some have found favour with teachers and particularly diligent children. Schumann, of course, leads the way with his Kinderszenen, but there are other collections from composers as diverse as Dallapiccola and Nielsen. What the best of these pieces have in common is something that their music shares with the best of children’s literature: the ability to sustain the interest of the Young and the Old.
A World of Miracles pays an important debt to Schumann’s Scenes from Childhood, a debt acknowledged in the final movement. However, the scenes from childhood pictured within this work are those depicted by the author G.K.Chesterton in the second chapter of his Autobiography. The chapter is titled The Man with the Golden Key and is a kind of secular sermon on memory. His ‘text’ is his first childhood memory recounting a scene from his father’s toy theatre. With a nod to Schumann 12 paragraphs from The Man with the Golden Key have been selected each with titles from within the text itself. 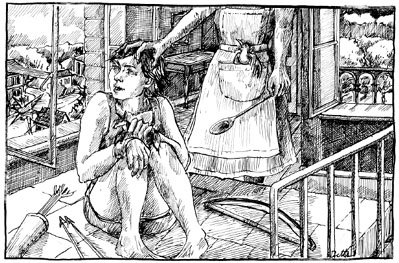 An ambition in this collection is to provide music that can be played by both by the enterprising young person and the inquisitive older person. In the keyboard part the physical demands are not great, indeed some of the pieces attempt to follow Nielsen’s example in his Klavermusik for Små og Store where the spread of each hand sought by the music rarely requires more than the interval of a fifth. The violin part makes no such concessions and requires a more mature technique, although the music remains well within the bounds of good student and amateur players. Whatever the age and experience of the performers the music offers much scope for the play of musical imagination.

A World of Miracles is the final section of Childhood and Memory (Link currently in maintenance), a four-part multi-media project celebrating the legacy of Robert Schumman in his anniversary year 2006. Kinderszenen and Dicterliebe have provided both a scaffolding and a starting point, embodying as they do reflections about innocence and the loss of what has once been loved.

from A Lost Experience in the Land of the Living

The Man with the Golden Key [mp3]

The Things we Remember (are the things we forget) [mp3]

A World of Miracles [mp3]

A Hobby is not a Holiday [mp3]

The White Light of Wonder [mp3]

A Lost Experience in the Land of the Living [mp3]